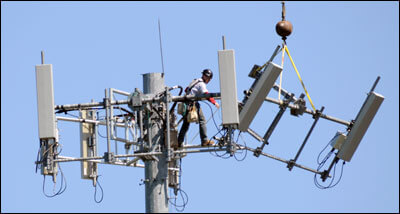 When people hear that you’re a tower climber, there are usually two things that that job description brings to mind. The first is, “Wow, you must be a serious daredevil.” The second is, “And you must make some serious cash.” Anyone who’s worked on cellular towers can attest to the prevalence of these reactions.

“I think…the part where you tell people what you do for a living and the awestruck looks on their faces sometimes,” an experienced tower climber in the Pacific Northwest told an interviewer for Jobsearcher.com when he was asked what he would say is the most rewarding aspect of his job.

While there’s no question that tower dawg tend to be male and they obviously can’t be easily intimidated by precarious situations, the matter of compensation can be a bit of a tricky one, and there are a lot of other qualities that come into play in this job. Climbing a tower that can range anywhere from 200′ to 1500′ in the air is clearly an exhilarating experience that most thrill seekers would gladly welcome, but it’s important to remember that these workers are not up there simply to enjoy the view.

Cell tower climbers need to have a strong handle on how both electrical and computer systems work, since a good part of what they do is to inspect and repair these systems. Although there are times when they’ll be up there for something relatively easy, like changing out a light bulb, just as often they will be required at the top of the tower to fix a faulty part or to ensure that everything is in proper working order up there. Changing out things like feed lines or a bad antennae might be called for and there are other times when you’ll be involved in the actual construction of the tower, in its final stages. This means that these workers need to have not only a lot of range in their skills set, they also need to have very good eye-hand coordination to boot.

Meanwhile, it might seem obvious, but climbing almost a quarter of a mile into the sky does have a tendency to make the average person just a tad jumpy, if not straight terrified. It’s not uncommon for new people to come into the work thinking that they have no fear of heights, only to discover that they do have an intense fear of extreme heights. The climber in the Northwest has given that some thought.

“…we’ve had people come to work here saying that they’re mountain climbers, they’re not scared of heights or anything, and they don’t last a day because they can’t do it. I don’t know if it’s just being out in the open because when you climb a mountain you have a big wall in front of you so you can’t see nothing else (sic), but when you climb a tower, ninety percent of the time you can see right through it,” he told Jobshadow.

As for the great pay that everyone assumes comes with such a risky job, tower dog will be the first to tell you that they do usually get paid fairly well, but they also point out that there are extra costs associated with this career that most people don’t think of. Take into consideration, for example, the price of life insurance when you have a job where a momentary lapse in judgment or a minor equipment flaw could kill you. In fact, as experienced tower dogs will tell you, this is one job where the health insurance premiums are low, but the life insurance premiums are high. That’s because if you fall, there’s little chance that there will be enough of you to fill a hospital bed, let alone provide hope for a recovery. One tower dog estimated that he spent almost a third of his income on his life insurance policy, although he admitted that he did have a large benefit because he felt that the risk of his family having to cash it in was so great.

The money itself can vary by what region you’re working in and a big factor in your salary will be your experience as a climber. There’s a lot of growth in this field and there is plenty of room for advancement, particularly if you are comfortable with computers and what it takes to keep them running smoothly.

Tower dog are also usually expected travel to jobs that may take them anywhere from a few counties away to a few states away. There are benefits to the travel, of course. You do get to see the world on someone else’s dime and you get paid while you do it. But for those who have a family or other obligations at home, the constant travel can really start to wear thin after awhile.

Consider too that winter days that high up can be painfully cold. There’s normally nothing up there to break the wind, so you really are at the mercy of the elements. Some days, depending on where you work, it will simply be too cold to go up at all. Thunderstorms are also an obvious no-go for cell tower climbers, so you can at least count on having those days off, though you don’t usually get paid for work unless you’re actually there.

Tower climbing is by no means an easy job and it’s often downright uncomfortable. Those with a weak constitution definitely need not apply. And while the money may be good, the risk to life and limb is through the roof. In fact, there are plenty of arguments for why a person shouldn’t sign on to do this gig. Some might even say that those who do this job every day must be at least a little bit crazy. But a tower dog who loves the job, and there are plenty of them out there, can always come back with one simple and sincere reply: “Yeah, but check out the view.”