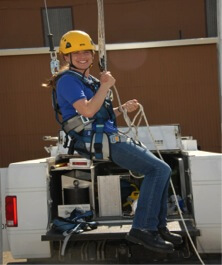 From the beginning of time there have always been those people known as excitement seekers or adrenaline junkies who love living life on the edge and taking on jobs that would terrify most people. Then there are others who take on those dangerous jobs due to wanting to make the world a better place or simply for the money that jobs supplies. While most of us immediately associate jobs with the police force, or as firefighter as dangerous, but one of the most dangerous jobs today is that of a tower climber. Here is a brief look at what a tower climber is, what their job entails, and the dangers and rewards of being a tower climber.


What Does A Tower Climber Do?

Tower climbers work on cell phone towers, they routinely climb 200 to 500 feet off the ground, inspect different towers and do both troubling shooting and making repairs. Since there are so many cell phone towers and more being built on a daily basis, tower dawgs are in high demand, and often travel long distances and work long hours often 7 days a week to keep those cell towers in good shape and supply service to the majority of self phone users.

Tower climbers need to be unafraid of heights, and have a good upper body strength as they not only climb hundreds of feet off the ground, but they do so carrying heavy equipment to conduct tests and make repairs.

What Makes A Tower Rigger’s Job So Dangerous

There are several things that makes a tower climbers job extremely dangerous. One thing is the number of miles they are expected to travel from job site to job site, often then being required to immediately climb the tower without adequate sleep or rest after traveling. Lack of proper rest results in slow responses and increased mistakes that can result in falls or injuries that can leave a climber seriously and permanently injured or even dead.

Another thing that often results in serious injury and death, is that the work load for this job is so heavy, that workers are actually encouraged to do their jobs as quickly as possible, which often results in the tower climbers climbing those towers without first putting on or using the proper safety equipment, that would ensure their safety should they slip or fall.

It is estimated that there have been at least 100 tower climber deaths over the last ten years, many of which could be avoided if safety procedures were followed. This figure is expected to rise with more and cell towers being built and needing to be maintain unless some safety procedures are locked into place and followed.

The main reward for towers climbers is the monetary amount they received. Climbers make on average a little over $20.00 an hour and for people with only a high school education. In a time when good paying jobs are scarce and job security is practically unheard of, having a good paying job where your skills are constantly in demand provides a real measure of job security.

Of course some people find that simply being able to do a job that many are unable to do has it’s own reward, and for those adrenaline junkies the fact, that they are physically challenged each and every day is a reward in itself.