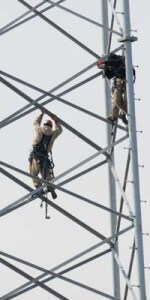 The wild and adventurous life of a tower climber is one that many people, men and women included, often aspire to. However, the dangers that naturally come with working at such heights, in all weathers, usually around live electricity, are usually enough to prevent the majority of people that are interested in a career as a tower climber to think again, and choose something different. For those brave men and women that are persistent, and seriously look at tower climber jobs, there are rich rewards for them.


Of course, the exact numbers of what a tower climber will earn throughout a year will greatly depend on the type of towers that he or she climbs, and the company that they work for. However, just like other people that work in high pressure, stressful, technical and dangerous jobs, such as pilots, doctors, and other electrical engineers, the salary that a tower climber will receive reflects all of these factors. A typical tower climber salary for someone that is just starting off can seem to be incredibly high, but it is a mark of the respect and danger that the job garners. A beginner at tower climbing can expect to be earning around $40,000 a year, and even up to $60,000! That is why tower climber jobs are so popular.

On the other hand, to give a balanced view it must be said that a tower climber salary can vary wildly. In fact, a study has shown that the lowest ten percent of tower climbers are only paid about $26,200 a year, which certainly does not seem like a fair wage. Of course, the longer you work as a tower climber, the higher your wages will become, especially if you progress to become a tower project manager. A tower foreman salary is obviously going to be much higher, because with that extra workload comes extra responsibility. Typical salaries for a tower climber foreman can range from $70,000 a year to even a majestic $130,000!

So, if you are considering whether or not to train to become a tower climber, do not let the worries about low wages concern you. There is plenty of money within the business to support you, and even a family if you have one, so why not take the plunge, and begin your journey that leads to some of the most incredible views in the world!