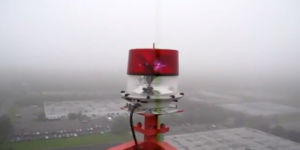 Tower climbing, or cell-tower climbing, is the most dangerous job in America. Between 2003 and 2008 there were 70 job related death in the US, and only 10 reported internationally. While this could make someone wonder about the safety standards in the US, remember that more towers exist in the US, so it is more likely that deaths would occur in the US. Also, some countries may not accurately report deaths.

On most lists, tower climbing ranks #1 as far as dangerous jobs. On all lists, it ranks top 10. New requirements in this industry have made the tower climbing industry a lot safer than it used to be and proper preparedness and training on the part of the climber can prevent most injuries.

Tower climbers may have to climb as high as 1700 feet to reach the peak of certain towers. This is higher up than the Sears Tower and Empire State Building. It is not a violation of OSHA regulations for climbers to “Free-Climb,” that is climb without a safety harness. And while this is the way most tower climbers climb it is also the cause of most falls. The logic behind the free climb is that the amount of energy expended fastening, unfastening and refastening the harness clips will cause the climber to tire more quickly than free climbing.

Even with great gloves and a firm grip, the bars that serve as a ladder can be slick or unnoticeably wet. The tool bag which must be carried up can weigh 30 pounds. As climbers are unlikely to know what tools they will need, they must bring everything they could possibly need to handle any situation. At great heights there is a serious risk of the wind grabbing the bag and throwing the climber off balance. Wind speeds are hard to determine from the ground. A 5 mph ground wind can become a 50 mph wind once up in the air.

Storms are another element to climbing that is very unpredictable. Blue skies can be inhabited by storm clouds in the time it takes to climb to the top. There are metal “flowers” attached to the top of antennas that are designed to disperse electricity. In the event of a lightning strike, these flowers would not prevent a climber from getting struck by 100 million to over 1 billion volts of electricity.

Advanced weather monitors can help a climber determine the likelihood that the clouds will develop into electrical or other storms. Lightning is not the only danger that comes from storms. Rain drops, ice drops and hail are more likely at higher elevations, regardless of the season. Anything unexpected can be deadly for a tower climber because there is no “quick escape.”

Radio Frequency, or RF, damage has been covered in other articles. But, this is perhaps the most dangerous of the hazards a tower climber may face simply because it is unseen. The companies that own the towers will lower the frequency while people are on the tower. But, sloppy paperwork or miscommunication can lead to the towers not having their RF frequency turned down. Without a properly functioning RF meter, the only indication a climber would have to a tower being “hot,” would occur after the climb has already begun. The warning signs could be a sudden rash, a burning or tingling in the arms and legs, even a numbness.

There are other seemingly small matters that can be dangerous on the job. Poorly maintained equipment, malfunctioning equipment, dead batteries on a radio or RF meter can all reek havoc. Experienced climbers develop a sense for the ins and outs of the unforeseen. New climbers can learn a lot from the insights of those who have been doing the job longer than others.