Cell phones are our era’s ubiquitous technology device. There are more active cell phones in the U.S. than actual people. For the first time, PBS investigation has revealed the number of fatalities at subcontractors working on each of the carrier’s networks: AT&T, Sprint, T-Mobil, Verizon (Day, 2012).

AT&T was racing to spin out a new cell phone network to deliver music, video and online games at more rapid speeds. The network, known as 3G, was crucial to the AT&T’s fortunes. AT&T’s cell service had been criticized by customers for its propensity to drop calls, a problem compounded when the company converted to the sole carrier for the iPhone (Day, 2012).

Tower climbing, an obscure field with no more than 10,000 workers, has a mortality rate roughly 10 times that of construction. In the last nine years, alone, nearly 100 tower climbers have been killed on the job. Alarmingly, more than half of them were working on cell sites. An investigation led by ProPublica and PBS “Frontline” shows that the convenience of mobile phones has come at a hefty price: Between 2003 and 2011, 50 climbers died working on cell sites, more than half of the nearly 100 who were killed on communications towers (Day, 2012).

Cell phone carriers’ outsource this dangerous tower climber jobs to subcontractors, a practice increasingly common in risky businesses from coal mining to trucking to nuclear waste removal. Due to this aspect, cell phone carriers’ connection to tower climbing deaths has remained invisible. In the Occupational Safety and Health Administration’s database of workplace accident investigations, you will not find a single tower climber fatality listed (Day, 2012).

“For each tower-related fatality since 2003, ProPublica and PBS “Frontline” traced the contracting chain from bottom to top, reviewing thousands of pages of government records and interviewing climbers, industry executives, and labor experts” (Day, 2012). In accident after accident, deadly missteps often resulted because climbers were shoddily equipped or received little training before being sent up hundreds of feet. To make matters worse, to satisfy demands from carriers or large contractors, tower hands sometimes worked overnight or in dangerous conditions (Day, 2012).

PBS reporting revealed that AT&T had more fatalities on its jobs than its three closest competitors combined. The death toll peaked between 2006 and 2008, as AT&T merged its network with Cingular’s and scrambled to grasp traffic achieved by the iPhone. “I don’t think there’s any question that the pressure to build out the network has been a contributing factor to fatalities,” said Steve Watts, who worked as a risk manager at AT&T until 2007. All other major cell carriers would not comment and declined requests to be interviewed for this story. 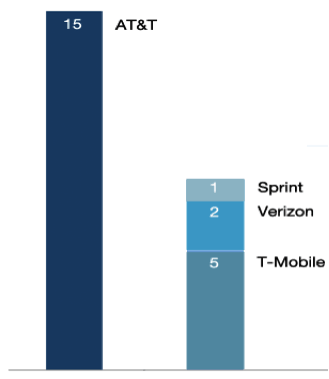 Nashville-based Phoenix of Tennessee, the parent company of All Around Towers, the subcontractor that had managed the climbing crew is the only OSHA cited company for safety violations. Inspectors concluded that Phoenix of Tennessee had not evacuated broken equipment from the site or addressed unsafe work conditions in plain view. The company had to pay a fine of $2,500. All Around Towers went out of business following the accident (Day, 2012).

Kyle Waites, the owner of Phoenix of Tennessee and part-owner of All Around Towers, said he sent climbers for re-training and purchased new safety equipment after the death of Jay Guilford. “Do I feel responsible to a degree? I think everybody does that was involved with it,” Waites said. “What caused Jay’s death was a chain of events that all could have, and should have, been prevented” (Day, 2012). “Once you leave men alone, the men have to police themselves,” he said (Day, 2012).

Until the 1990s, most tower work convoluted radio and television towers, which can be more than 1,000 feet high. Some phone companies employed staff climbers to endeavor on microwave towers used for long-distance calling. However, with the proliferation of cell phones, the pace and volume of tower work spiked. Carriers blanketed the country with cell locations to extend service to the most remote areas. Many advances in service require converting out antennas and doing other upgrades. The surge of cell phone work, forever altered tower climbing; an obscure field of with no more than 10,000 workers. It attracted newcomers, including outfits known within the organization as “two guys and a rope.” It also exacerbated the businesses transient, high-flying culture (Day, 2012).

Climbers live out of motel rooms, inaugurating antennas in Oklahoma one day and building a tower in Tennessee the next day. Climbers typically earn $10 or $11 an hour. The job seems to attract risk-takers and rebels. Of the 33 tower fatalities for which autopsy records were accessible, 10 showed climbers had drugs or alcohol in their systems. An analysis of OSHA records demonstrates that tower climbing has had a death rate roughly 10 times that of construction. In two dozen cases, for example, inspectors found that workers on sites where fatalities occurred had acquired inadequate training. Faulty or misused equipment was responsible in almost one-third of the tower-related deaths since 2003. Carriers sometimes power down cell sites when climbers are on them, so subcontractors often work overnight, which increases the risk of injury (Day, 2012).

Time pressure often leads tower hands to use a technique called free-climbing, in which workers don’t attach their safety harnesses to the tower. This allows them to move up, down and around more quickly, but leaves them without fall insurance. In more than half of the tower fatalities examined, workers were, in fact, free-climbing, even though government safety regulations strictly forbid it. It is very appealing and most climbers eventually give in to it (Day, 2012).

Cell carriers give several reasons for why they outsource their tower work: Building and maintaining towers, though crucial to cell service, isn’t part of their core business, is one. Contractors have greater expertise with construction and it’s more economical to hire workers where and when needed, given the up-and-down volume of work. Handling tower work this way also insulates companies atop the contracting chain from legal and regulatory consequences when there are accidents (Day, 2012).

Tower-climbing fatalities have decreased considerably since the end of 2008. Some in the industry give credit to improved safety practices to explain the smaller death toll. Others say the recession has cut into the volume of tower work and that, after finishing 3G upgrades, much of what carriers required could be done on the ground. With the next big push i.e. building out 4G LTE networks, just getting underway in major markets, some veteran climbers continue to worry that the fatality numbers will rise again (Day, 2012).