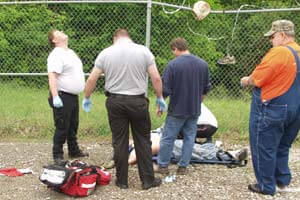 It has never been a particularly well kept secret that tower climbing is an incredibly dangerous job. Seen by many as more of an extreme sport than a safe working environment, there are many different courses and qualifications that have been made available to those that want to work as tower climbers, in order to better equip them as tower climbers. As such, knowing the risks is important to avoid tower climber deaths.

Sadly, there has been an increase in people working on towers dangerously over the last couple of years. There are a few reasons for this: firstly, many people are being laid off, leaving the same number of towers for a smaller number of tower climbers. This means that some tower climbers are driving for more than twelve hours, and then immediately going up a tower. Secondly, there seems to be a level of peer pressure to climb with a smaller and smaller amount of safety gear, which is just ridiculous. And lastly, safety equipment is incredibly expensive, and some tower climbers that are just starting out do not have the initial funds to purchase all of the gear that they require.

These reasons, however, are not good enough to justify the loss of life. Nothing is. There have been many more tower climber deaths in the industry in the last few months, which is worrying many people. In 2013, thirteen individual tower climbers were killed at work sites, which was a larger number of tower climbers than those that died in 2011 and 2012 combined. It is only May, and already another four tower climbers have died in 2014.

The majority of tower climbers deaths occur due to falls from a ridiculously high distance. However, two of those that have died in the last fourteen months were killed when a tower collapsed on top of them in West Virginia, and that was not the end of the incident, a fire fighter died trying to aid the tower climber, and another two tower workers were highly injured due to the destruction. Some have argued that tower climbers have a risk of having a fatality thirty times more likely than the average American worker, which is quite a scary prospect.

Many people believe that tower climbers are paid such high amounts of money per year as partly ‘danger money’, just as surgeons are paid a lot of money because they run the risk of sadly not being able to save someone on the table. It is also why tower climbers should always be covered by a high amount of insurance, to protect them for any potential health costs and to help them live for the rest of their lives if they cannot work again. However, this money can never be enough to cover the loss of a loved one.

There are many calls within the tower climbing industry to make conditions safer for those that are risking their lives to give us good electrical signals. Some suggestions about how to make tower climbing safer is to bring in further regulations about what sort of qualifications new tower climbers will need to have in order to practice tower climbing safety. It has been stated that the deaths this year and last were totally preventable, making them even more tragic. However, it is becoming more and more difficult to accurately follow which tower climbers have the correct training and experience and unfortunately, there really is nothing like actually climbing a tower to make you a better tower climber. It is a bit like pole vaulting: at some point, you simply have to take a deep breath, and start running.