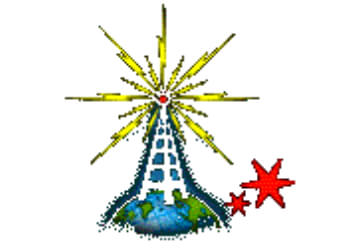 TENNADYNE has specialized in the design and manufacture of the broad-band Log-Periodic Dipole Array antenna, from 1.8 MHz to 3.0 GHZ, supplying these antennas to Commercial, Military and Amateur Radio (since 1990) interests worldwide.

.4 - 2.5 GHz for the
Navy Research Labs
Here at TENNADYNE, we have used our antenna test range (not just a computer program that may or may not adequately address our subject) to enable us to thoroughly understand our product, all antennas under test are referenced against pertinent 1/2-wave dipoles. From this work, we have developed our own extensive and proprietary LPDA antenna design program.
"It's as good as the stacked 3-element custom made mono-band Yagis that I was using. It was a snap to assemble and install. Hugo (big hurricane) didn't touch it."
KE4FW Al Pace [T10]
It's a fact, nature is constantly trying to dismantle your antenna installation. Sometimes it's a sledge-hammer blow like a major ice or windstorm. Most of the time, it's much less obvious, simply a subtle, long-term dismantling involving water, corrosion, UV degradation and vibration. To counter this process as well as anyone can, TENNADYNE antennas are ruggedly built, heavy-duty, top-quality beams consisting of high-strength, heavy-wall, seamless 6061-T6 alloy aluminum tubing and all stainless steel hardware. The tubes of our elements telescope one-part-to-another with a nominal fit of .0045", and the elements fit into the precision machined booms with a .002"-.003" tolerance. It's proven, TENNADYNE antennas take it through all kinds of weather and environments with little maintenance; all are rated to 100 MPH!

"I constantly get comments of "Strongest G on the band" or "outstanding EU signal". Thanks for developing such a clever design and an antenna that really provides excellent value. I thought I was happy with the TH7, but the T10 is by far the best I have used."
G3MLO Peter Weatherall [T10]
An LPDA antenna is a frequency-independent device with unsurpassed frequency bandwidth and agility with close to equal performance at any point within its design parameters. Each of our LPDA elements is not only virtually 100% efficient, it also closely matches the 377 ohms impedance of free space, a further contribution to its efficiency. The real-world performance capabilities of an LPDA antenna are equaled or bettered by only perfectly designed, constructed and matched mono-band antennas of comparable or larger size. MONO-BANDERS v. LOG-PERIODICS! ONE BAND v. MANY BANDS!
"Many, many contacts were made "dead band."
Greatest advantage......being able to hear 'em."
NØTM Paul Flint [T10]
TENNADYNE LPDAs use a double boom, one above the other, that perform a double duty. They act as [1] a constant impedance transformer, providing a constant impedance match between the very high impedance of the LPDA elements and your 50-52 ohm feedline. They also [2] provide a rigid fore-to-aft structure much like a truss, giving very strong mechanical support to the antenna elements. Overall, this boom structure is exceptionally strong! Each boom is precision machined so that the elements pass directly through them, continuing with the constant impedance transformation!

One of the things that distinguishes TENNADYNE LPs from those of other manufacturers is this use of a double boom, and there's more to it than meets the eye. In Chapter 24 of the ARRL Antenna Book, the one on Transmission Lines, the book states, "In installing parallel-wire line....the line should be kept away from other conductors, including downspouts, metal window frames, flashing, etc., by a distance of two to three times the line spacing. Conductors that are very close to the line will be coupled to it to some degree, and the effect is that of placing an additional load across the line at the point where the coupling occurs. Reflections take place from this coupled "load", raising the SWR. The effect is at its worst when one wire is closer than the other to the external conductor. In such a case one wire carries a heavier load than the other, with the result that the line currents are no longer equal. The line then becomes unbalanced."

Every LP on the market must use a form of the open-wire line as a feedline within the antenna structure itself, whether it is actually made of wire or, in the case of TENNADYNE LPs, the booms themselves. Imagine, if you will, what happens when you run this feedline, from one end of the antenna to the other, only inches from the grounded boom of the antenna. A clear reason why TENNADYNE LPs are superior....by design.